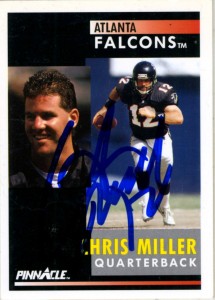 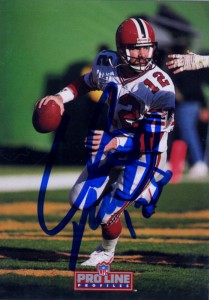 Out of the University of Oregon, the Atlanta Falcons drafted Chris Miller with their first round pick of the 1987 draft under head coach Marion Campbell. A solid, traditional drop back passer with great mechanics, Chris was also a talented pitcher who threw for the Bellingham Mariners and Salinas Spurs in 1986. 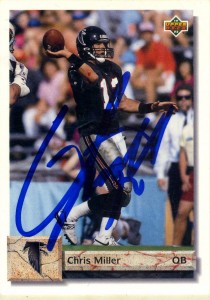 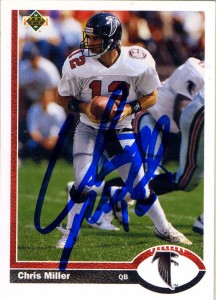 He’d be slowly brought along by the team, but by his second year, Chris established himself as the starting quarterback of the Falcons. In 1989, despite the team’s bad record, Chris led the NFL with the lowest interception ratio at 1.9%. Oddly Miller is one of those strange quarterbacks who had a good touchdown to interception ratio, but had a losing record.

It wouldn’t be till 1991 when head coach Jerry Glanville took charge and installed the Red Gun offense that Miller would take fire, leading the team to the playoffs, posting his best record and statistics as a professional. He’d also go to the 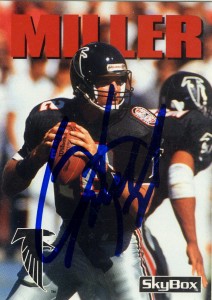 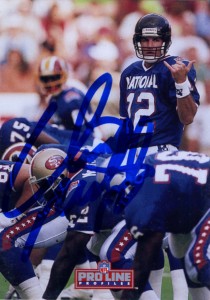 Pro Bowl after the season- one of the major highlights of his career.  He’d leave the Falcons and sign with the Rams, staying there for two seasons in 1994 and 1995, before retiring due to a concussion.

He would heroically return in 1999 to play for the Broncos- but once again he’d suffer another concussion and retire for good.

Since pro ball, Chris has coached at the High School level back in Oregon before he was hired to be the Cardinals quarterbacks coach in 2008. I met him at the CGA youth golf tournament where 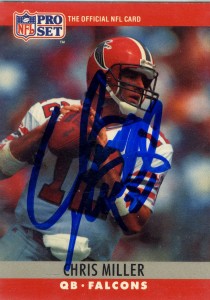 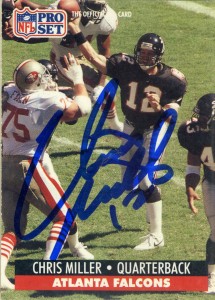 he signed every card I had on me in exchange for the 17×24″ drawing I did of him. He was really impressed by the likeness that I did of him.