Alonzo joins the Hall finally. I’ve missed out a few times on Highsmith. While I got his autograph on an official Houston Oilers Souvenir page back in 1988, it did not strike me at the time to get him on cards. Then when he was traded to the Cowboys, he was not at Cowboys training camp for me to get his autograph on. Finally I was still in California when he was at Fan Fest II in Houston last year. Had been working my way around to him since I got started, and for the longest time didn’t see any replies out of the former Houston Oiler, but recently he lit up sportscollectors.net, so I shot him out a request as soon as possible. I noticed that the response times were erratic, so I was happy to get a return in a bit under 80 days.

Alonzo Highsmith was a strong downhill runningback from the University of Miami where he played for Jimmy Johnson. He was the third overall pick of the 1987 draft by the Houston Oilers, and after an acrimonious holdout, he started 3 games at running back and ran for 106 yards. Jerry Glanville moved him to fullback to best utilize his skills, after a logger jam developed at runningback between Mike Rozier, Allen Pinkett, and recent draftee Lorenzo White.  His best season as a pro came in 1989 when he ran for 531 yards and 4 TDs, and caught another 18 balls for 201 yards and 2 TDs.  Frequent knee issues were taking their toll on Highsmith though. 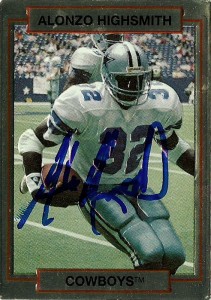 In 1990, the Oilers had new head coach Jack Pardee and with a conversion to the Run ‘N Shoot full-time, the Oilers had even less room for runningback, little less a fullback.  Houston traded Highsmith to Dallas where he was reunited with former Hurricanes coach Jimmy Johnson. He’d start 6 games mid year for the resurgent Cowboys that season, and then sign with the Buccaneers where he finished 1991 and 1992, before retiring.

Alonzo followed the route of some other players after their playing days are over, becoming a professional heavyweight boxer. He’d go 27-1-2 with 23 KOs before returning to football as a scout for the Packers organization. Recently he moved up in the organization, and will be moving to Green Bay with his family to live fulltime in the Summer of 2012.