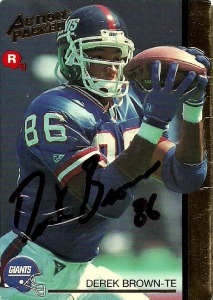 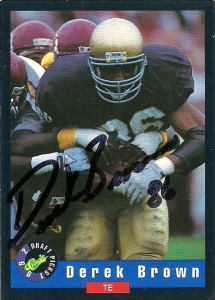 Derek Brown (at least through 2014) has been a very generous signer TTM. A first round pick of the New York Giants in 1992 and a member of the Notre Dame National Championship Team in 1988, Brown was an accomplished blocker with good career receiving statistics. His best year came in 1991 when he caught 22 receptions for 325 yards and 4 touchdowns for the Golden Domers. Over his time for the Fighting Irish, Brown compiled 62 receptions for 899 yards and 8 touchdowns in 34 games. 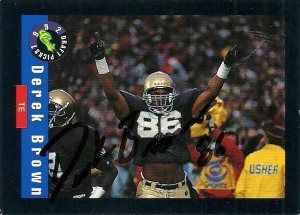 The Giants were transitioning from the Bill Parcells era into the Ray Hadley ‘zone’. Hadley – the offensive mastermind behind the Giants Super Bowl XXV season, opted to make an upgrade at tight end. With Mark Bavaro walking after the 1991 season, the Giants were eager to upgrade at one of their most valued positions. Brown seemed like the perfect replacement for Bavaro and a no brainer at pick #17. The problem was the team was also going through a transition at quarterback as well. Phil Simms and Jeff Hostetler battled it out at quarterback, with the ‘heir to the franchise’ Dave Brown even taking snaps. Unable to unseat Howard Cross at the position, Brown was relegated to 7 starts, as a second tight end and extra blocker in 1992, and none in 1993 or 1994. 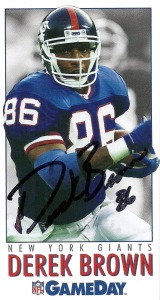 In 1995 the Jacksonville Jaguars and the Carolina Panthers joined the NFL as expansion franchises. Derek was selected by the Jacksonville Jaguars with the 47th pick. It made sense for Derek to go to the Jaguars as they were coached by Bill Parcells disciple Tom Coughlin. A near fatal hit in a preseason game sent Derek to the hospital for 10 days causing him to miss the entire season. He returned in 1996, recording a career high 17 receptions for 141 yards as the Jaguars made the AFC Championship Game. Derek returned in 1997 to the Jaguars, recording his first and only career TD reception in a game against the Dallas Cowboys.

Derek joined Oakland in 1998, starting 4 games and making 7 catches in his one season there. He’d then play for the Arizona Cardinals through the 2000 season before ending his career.  He currently lives in New York with his wife and children.