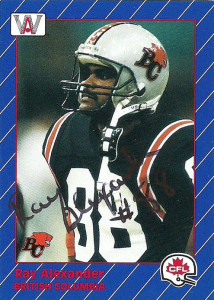 Talking about no respect. After making the roster of the Denver Broncos his rookie season, Alexander played in the CFL for the Calgary Stamps in 1985. In 1986 he had a pretty solid year, posting 1,590 yards, on 86 catches, to go along with 10 touchdowns. Feeling like he had a score to settle, Alexander returned to the NFL, where he was signed in 1988 by the Dallas Cowboys. He’d work his way into the starting lineup for the Cowboys in Tom Landry‘s final season. He’d proudly lead the team in receiving making 54 receptions for 788 yards and 6 TDs. With a change in management in 1989, and Jimmy Johnson brought in, Alexander was short on time to impress management. After an injury sidelined him for most of the season, Ray quickly returned to the CFL and the British Columbia Lions in 1990.  He’d post 4 1,000+ yard seasons in 5 years for the team, and then sign with the Ottawa Rough Riders in 1995. Although he was traded back to the Lions before the conclusion of the season, Ray did not see any time on the field, and retired shortly thereafter.