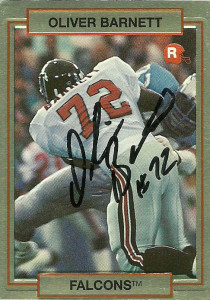 Jerry Glanville drafted Barnett in the third round of the 1990 draft. The defensive lineman had experience playing across the line but it looked like Glanville penciled him in at defensive end.  A physical specimen and gym rat, Barnett set the Kentucky Wildcats combined weightlifting record (850 squatting) with 1,685 lbs. He finished his career at Kentucky with 212 solo tackles, 1 fumble recovery, and a school record 26 sacks- which was not bested until 2015.

Glanville was hot out of Houston, and after orchestrating the Jeff George trade that netted him Chris Hinton and Andre Rison, and a few first round choices, the Falcons developed in a hurry.  Barnett was a depth play by the team, as you could never have enough fresh bodies playing on the line in a 3-4 set up.  Barnett was an enigma to scouts because they felt that he never completely played up to his potential.

Oliver had a serviceable and respectable career in the NFL.  His best season arguably came in 1991, when he recorded 47 tackles, 1 sack, and recovered a fumble that he returned for 75 yards for a TD.  In 1992 he started a career high 7 games recording 54 tackles. In 1993, Barnett signed with the Bills, playing 2 seasons for Buffalo, before finishing out his career in 1996 with the San Francisco 49ers.

In 2013, Barnett was inducted into the Kentucky Wildcat Hall of Fame.