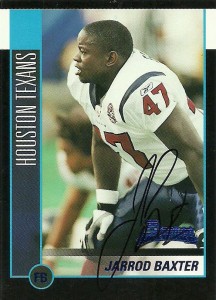 When the expansion Texans were making their moves in 2002, it was plainly obvious to me that the Texans were going to draft Baxter (- the highest rated fullback that year) coming out of college from New Mexico at the top of round 5. Why? Because back then when the NFL conducted its annual draft, (that it continually tinkers with,) day 1 were rounds 1-4, and day 2 were rounds 5-7.  Baxter clocked in at an impressive 6′ 1″, 245, and in Chris Palmer’s offense, he liked a traditional strong fullback leading the way. He’d play in the Texans’ 19-10 opening victory over the Dallas Cowboys, and start an additional 9 games that season. Baxter was held back by the team to protect quarterback David Carr, with the team’s anemic offensive line situation. He’d score his first – and only professional touchdown in a 17-10 loss to the Tennessee Titans, on a 14 yard reception. 2003 was wiped due to injury, but Jarrod came back for 2004, suiting up for 8 contests. Baxter signed with the Arizona Cardinals in 2005 and again saw action in 8 contests, retiring after the season. Baxter has found his way into coaching since then and as of 2014, is a coach in the Houston area school district.