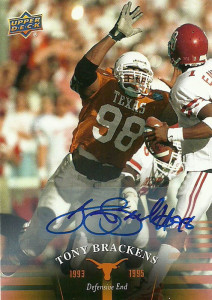 Tony Brackens was an All-American while playing for the University of Texas from 1992-1995. A physical defensive end,  in 32 games Brackens had 247 tackles, 32 tackles for losses, and 24 sacks.

Tony was selected by the Jacksonville Jaguars in the second round of the 1996 draft.  Used in a platoon of lineman manning the Jacksonville 3-4 alignment, Tony was present for the Jaguars early glory days and saw time in 5 playoff games over 3 seasons.  Tony’s best season came in 1999 when he registered 12 sacks, 55 tackles, and 2 interceptions for 16 yards, a TD, and 8 (not a misprint) forced fumbles. He’d also post 2 sacks, 2 fumble recoveries, and a TD in the playoffs that year. After the 1999 season Brackens earned his only All-Pro nomination.

Brackens played through 2003, but retired after multiple leg and knee injuries took their toll on him.  A very popular member of the team, you could almost say that when Brackens retired, it was a passing of the torch to the next generation of Jaguars.  I was very happy to get Tony’s autograph in the box break. He is very difficult to get TTM.