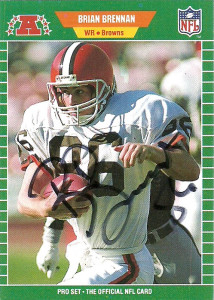 Brian Brennan was a consistently unheralded receiver in the Browns receiving corps from back in the 80s. Reliable, with good hands and route running, Brennan was a player who made it despite the naysayers by sheer grit and determination- almost like a prehistoric Kevin Walter. 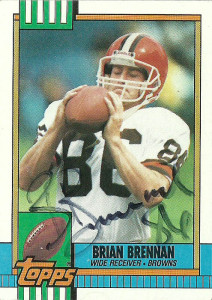 Brian was an All-American wide receiver and established Boston College records for career receptions (115) and single season receptions (66). A teammate of Heisman Trophy Winner Doug Flutie, Brennan’s 2,180 career yards and 1,149 single-season yardage totals also set BC records. A 4th round pick of the Browns in 1984, Brian had to contribute any way he could and spent his first two years as the primary punt returner, even nabbing a TD in 1985. Never a starter in the wide receiver corps, somehow Brian managed to make big plays when they counted. His best season came in 1986 with 55 receptions for 838 yards and 5 touchdowns.  Surrounded by guys like Bernie Kosar, Ice Cube McNeil, Kevin Mack, Webster Slaughter, Ozzie Newsome, Earnest Byner, and Reggie Langhorne, Brennan always had to fight for scraps. 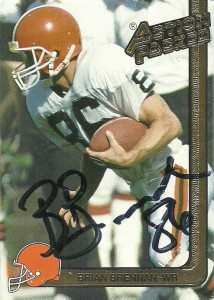 Brian played through the 1991 season and then joined the cross state rival Bengals for a few weeks, before closing it out with the San Diego Chargers.

Since retiring Brian has worked as a broadcaster for the Browns and was inducted into the Cleveland Sports Hall of Fame in 2009. I had tried previously in the past to get Brian, since he has some surprisingly nice cards but was unsuccessful. I decided to give it another shot and got these 3 back in the mail in a short amount of time.