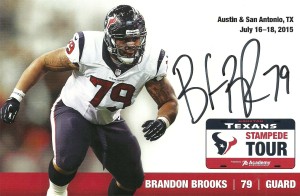 I had started following Brandon Brooks on Twitter way back when he was drafted by the Texans in 2012, where I learned he was an anime fan. When the Texans named that he was coming to the Battle Red Stampede there was collective disappointment by the autograph community on Texas Autograph Club. Another member said, “Austin will always be Dallas country as long as the Texans don’t send decent players.” I thought that was pretty obtuse. While Ryan Griffin is an intriguing prospect who occasionally flashes, Brooks has really improved to a point where he is a bonafide starter that borderlines on Pro Bowl status. 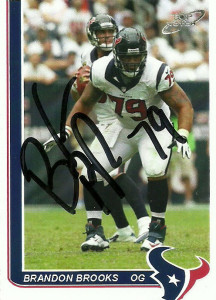 An up and coming talent, Brooks has anchored down the right guard position since a strong finish to his rookie season in 2012. After a slow start, where he was roundly criticized by then head coach Gary Kubiak for his weight and conditioning, Brandon has really become a very solid blocker on the offensive line and has only allowed 2.5 sacks in 36 games.

Since Brandon did not have a football card (despite being taken in round 3 of the 2012 draft), I went ahead and created a Top Notch entry of him.  After signing 2 for me, I gave him the rest of the cards to keep. He liked them a lot and not really knowing what to do with them- stuck them all in his pocket.