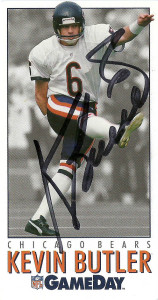 Kevin Butler. The name probably still brings a smile to the face of Georgia Bulldogs faithful fans, as Butler ranks near the top of many of UGA’s career and game charts.  Among the most noted memories is when Kevin kicked a 60 yard field goal to beat the Clemson Tigers. It was said that the ball sailed another 5 -10 yards over the goal post after hanging a clear 6 seconds in the air. A kick made from your own 49 1/2. It sounds the stuff of legend and Tecmo, but it is absolutely true. Butler at the time of his graduation was the all-time leading scorer at UGA with 353 points and made over 50% of his kicks (11 of 21) from over 50 yards. 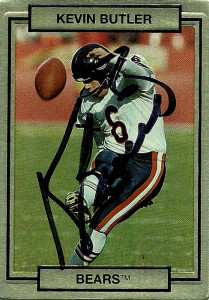 Kevin was selected in the 4th round of the 1985 NFL draft by the Chicago Bears.  The pick was questionable actually. The Bears were strong, and already had a pretty decent kicker in Bob Thomas, but the GM at the time  Jerry Vainisi, felt that he was the best player available in that round, and Vainisi was not wrong.

After winning the kicking job in camp, Kevin went on to set the NFL record for the most points scored by a player during their rookie season- with 144, easily besting the previous record held by the venerable Gale Sayers. Butthead was well liked by his teammates as he made 11 tackles on special teams his rookie season.  Of all the Super Bowl memories, Butler is one of the most unique, as he was forced to postpone his wedding to play in the game. 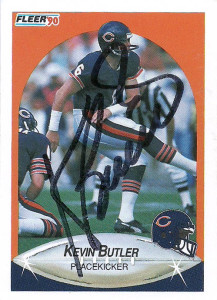 Butler matched the Mike Ditka Bears persona, even going so far as to looking the part. He sported the one bar helmet throughout his career (that slowly went out of vogue in 1986, until it was banned in 2004), and had uncharacteristically large biceps for a kicker. He had a fight and a bite to him.  Kevin was the kicker that the Bears sometimes bland offense could lean on – and he’d make those points, even at frigid Solider Field.  Butler made 110/119 field goals of 20 to 29 yards. Talking about automatic. In 1986 Kevin led the NFL with 41 field goal attempts. 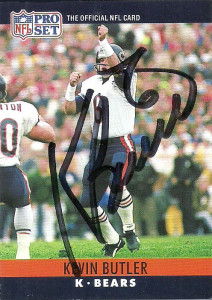 After a prolonged off-season contract dispute with the franchise in 1991, Butler had a rocky season hitting a career low 64.5% of his field goals. He’d rebound back to form the following season, and kick for the Bears through 1995. Butler was cut right before the final preseason game of the season by head coach Dave Wannastedt in favor of Carlos Huerta. The sudden change of kickers angered the Bears fanbase- but the deed was done. At the time of his release, Kevin was the Bears all time leading scorer with 1,116 points. Even more impressive when you consider that Butthead made 16/42 field goals of greater than 50 yards.  He was also the last member of the Chicago Bears ’85 Super Bowl team to play for the franchise. 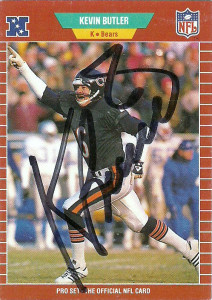 Kevin was not out of work for long. He’d spend the next two seasons with the Arizona Cardinals. While he’d continue to add to his legacy, Butler’s foray to the desert lands of Arizona was the last thing I’d have expected. It’s just one of those forgettable jersey moments since he was so intimately associated with the Bears.

Butler was a huge part of my offense in the original Tecmo Bowl as one of the best kickers in the game (probably second only to Biasucci), you could hit a 60 yarder with Kevin with practice, and with such a great last name, how could you hate a Butler?   After retirement, Butler became the first and only kicker inducted into the College Football Hall of Fame, in 2001. He has also been inducted by the University of Georgia and Florida-Georgia (rivalry) into their respective halls as well.  He remains a super fan of the Bulldogs to this day, and does radio as well.