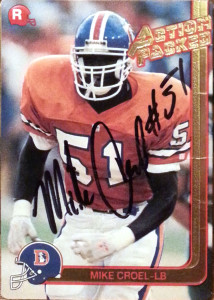 A short list player that I had wanted for some time, Mike Croel played collegiately at Nebraska. Mike played on some of the most dominating defensive Cornhusker teams during the late 80s and early 90s.

After being gashed on defense in 1990 the Broncos took a very defensive minded approach to their 1991 draft. It was a pretty good draft for Denver. Mike Croel was drafted in the first round with the 4th overall pick. Alongside Croel, Keith Traylor (3rd),  and Kenny Walker (8th) also made the roster. 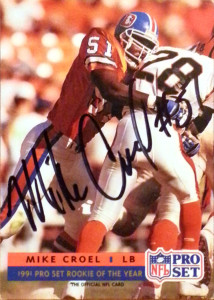 During the heyday of the trading card market right before things started to implode with the slow death of Pro Set in 1993, you could find trading cards everywhere and everybody was getting in on it. Not only were you able to find the cards in the local convenient stores like 7-11, but you could get them at places like… Michael’s, the Arts and Crafts store. I impulse bought a pack or two of the 1992 Pro Set standing in line there, and got this Mike Croel Defensive Rookie of the Year card in the pack.

He’d play RILB his rookie season. Blitzing from the inside, Mike recorded 10 sacks and 84 tackles in 10 games. This’d be good for 1991 Defensive Rookie of the Year Honors.  In 1992 he’d switch to LOLB, and in 1993 return a Brett Favre interception 22 yards for a TD against Green Bay in the opener. As the Broncos transitioned to a 4-3 Croel, played his final season in 1994 with the franchise at LLB. He joined his former head coach Dan Reeves in New York in 1995, and then made a pit stop with the Ravens in 1996. 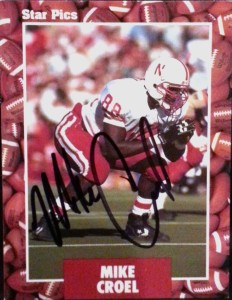 Returning in 1998 he played Spring ball with the Rhein Fire of the NFLE, before heading back to the United States to join the Seahawks for that year.

Mike again briefly popped up on the football radar playing for the XFL of the Los Angeles Xtreme in 2001. He was the first trade in the shortlived league- going from Las Vegas to LA for linebacker Joseph Tuipala. Croel retired soon thereafter before playing a down for the league.  Since then he’s dabbled in coaching and is a successful graphic designer in California.