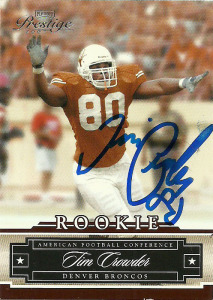 Tim Crowder hails from Tyler, Texas – home of Texas and Oiler great Earl Campbell. Following  in the footsteps of the Texas legend, Crowder also went to the University of Texas, helping the Longhorns defeat the USC Trojans for the 2005 National Championship. In his finest season at UT, Tim had 50 tackles, 3 sacks, 9 tackles for loss, an interception, and a forced fumble.

Crowder was a second round choice of the Denver Broncos in 2007, and finished 4th among rookies at defensive end, with 4 sacks that year. A concussion wrecked his 2008 season, so his grade with the Broncos was incomplete. He’d sign with the Buccaneers in 2009 and make 3.5 sacks and 37 tackles. In 2010, Crowder started a career-high nine games and tied for third on the team with three sacks to go with 42 tackles. He resigned with the team in 2011, but was buried on the depth chart behind Michael Bennett, Da’Quan Bowers, and Adrian Clayborn. Still he contributed 14 tackles and 2 tackles for losses. With a new coach in town in Tony Schiano, Tim was cut by the squad in 2012. Currently he’s considered a free agent.

With the sacred box of Texas cards in my car, I got Crowder knocked out on the only card I had of him. The surprisingly lanky Crowder, was happy to sign and knock this card out for me at the Total Athlete event.