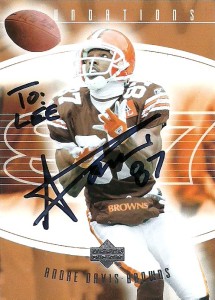 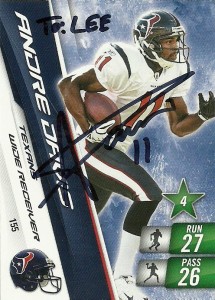 The new longest wait champion briefly was this response from André Davis at 555 days. Since then amazingly I got another player’s autograph through the mail that was over twice that long. The success percentage for waits over a year is pretty low, so I had easily given up on this one. I think that I sent it to an address in New York, but the response was postmarked from South Carolina.

I really liked these two cards of Davis. The Upper Deck Foundations card has a really nice design, but I really enjoy the Adrenalyn set. – It’s too bad that the set is a virtual card game that doesn’t really place any focus on the card backs.  Still it is a winner because it features Davis in a Texans’ uniform, where he enjoyed some of his finest play outside of Cleveland.