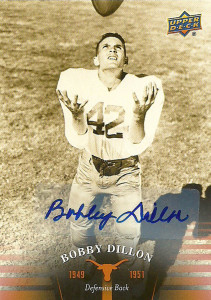 Bobby Dillon played for the Texas Longhorns from 1949 to 1951, earning All-American Honors. He was drafted in the 3rd round of the 1952 draft, and from there etched himself into Packer lore. 3 times over his career Dillon notched 9 interceptions at Safety. In 1956 he led the NFL with 244 interception return yards. He walked away from the game in 1959, and is still the Packers all-time career leader in interceptions. He’s been inducted into the Packers Hall of Fame, and earned Pro Bowl Honors from 1955-1958.  Surprisingly Dillon has not been inducted into the Hall of Fame, even as a Seniors candidate.