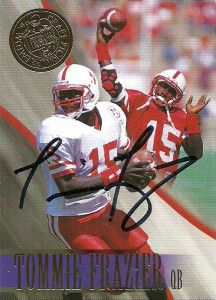 Tommie Frazier is easily the greatest college football player never to play in the NFL. A human highlight film during his time playing for the Nebraska Cornhuskers, Frazier had the build, numbers, and athleticism, to take his game to the next level, but a life threatening condition- namely Chron’s Disease, stopped him in his tracks.

Tommie joined the Nebraska Cornhusker program in 1992.  He cemented himself as the starter quickly over that season and did not look back.  Frazier threw 10 TDs and 1 pick that Freshman season, while rushing for 399 and 67TDs on 86 carries. The following year he’d run for a career high 704 yards and 9 TDs on 126 attempts.  An injury plagued 1994, pretty much wrecked his year, before a solid Senior campaign with 17 TDs to 4 INT. Tommie also had 604 yards on the ground and a career high 14 TDs rushing.  For his efforts he was voted a consensus All-American and finished 2nd in Heisman voting.

Tommie finished his career at Nebraska with a 49-4 record. He won numerous honors and MVP awards over his time there. Frazier’s signature moment was the 1995 Fiesta Bowl, when the Huskers crushed Florida 62-24. I remember my flash bulb memory went off as I was standing in the middle of Target, watching the big game. I had the pleasure of watching him run for a 75 yard TD as he broke 5-6 tackles. It was one of the most amazing plays I had ever seen.

Tommie was not drafted to the NFL due to health concerns. He signed with the Montreal Alouettes, and saw action in one game in 1996.  He retired from professional football shortly thereafter.

Frazier remains close to the sport. He was inducted into the College Football Hall of Fame in 2012. He also has done some coaching, both as a positional coach (Baylor) and as a head coach at Doane College in Nebraska.  Tommie held numerous records at his departure from Nebraska, and won 2 National Championships. His number has also been retired by the college.

About a year or two ago a lively debate about the greatest player never to play pro ball came up. At the time I brought up Charlie Ward, who was visting in town. Later though I remembered Tommie Frazier’s heroics on the gridiron for Nebraska, and threw my weight behind that statement on Twitter. I was really surprised to see that Frazier liked and agreed with my comment. After a bit of searching, I was able to find an address for him and he signed this old card of mine in a bit over 30 days.