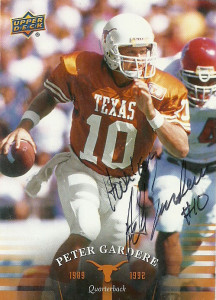 Pete Gardere is one of these dark horse Texas legends. I mean outside of Texas- if you weren’t a Longhorn fan, I’d be verily impressed if you knew who he was, and his contribution to the school. Pete played during the dying years of the SWC, when the way you got to watch games was on the Raycom Sports Network on that Fox affiliate- before it was Fox. Texas had David McWilliams at head coach, who was an acorn off of the Darrell Royal tree. 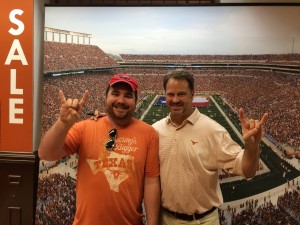 Gardere arrived at Texas and quickly assumed the starting quarterback duty as a true freshman.  Over his time at UT Gardere brought Texas painfully into the modern era of quarterbacking in a pro style offense. He also moonlighted as a punter. While playing for the school he set over 15 school records, which were broken and rewritten by the likes of Colt McCoy, Vince Young, James Brown, and Major Applewhite over the next 25 years.

The one record that still stands at this point- much to the chagrin of Sooners fans, is that Peter was 4-0 in the Red River Rivalry versus Oklahoma. In every contest, Gardere found a way to beat the Sooners, and even more impressive was that everytime the Longhorns were nationally unranked. Gardere finished with a record of 25-16 as a starter for the Longhorns. 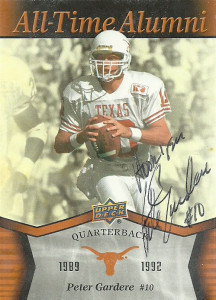 Despite his resume, Pete was not drafted, however he was given an invitation to camp with the Seattle Seahawks in 1993. He’d be cut, but quickly scooped up by the CFL, and signed by the Sacramento Gold Miners. He’d be the team’s punter and serve as emergency quarterback from 1993 through 1994. In 1995, Pete was the punter for the Memphis Mad Dogs- but the team contracted after the season. Gardere then signed with the New Orleans Saints, but after he was cut in camp, elected to retire from football. Currently he lives in Austin. He served as a filming consultant for the quarterbacks on the movie Varsity Blues, and has been involved in real estate in the lucrative Central Texas market for many years.

I met him at the UT Coop Fan Fest in September where he penned two more cards for me. He then mused about how old he was because I could remember watching him as a kid on Raycom Sports Network during those dying days of the SWC.