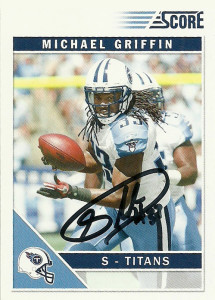 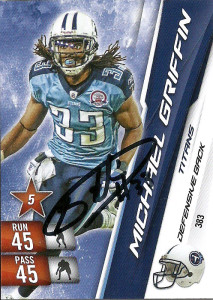 A two way star for Bowie High School in Austin, Griffin elected to go to the University of Texas. Michael was moved exclusively to defense where he played in every game, starting two games as a true Freshman. In 2005, he set the school single season record for punt blocks with 4. Over his career at UT, he posted 238 tackles,  four interceptions, five forced fumbles, five fumble recoveries, 11TFL, three sacks, and a UT school record six blocked punts.

The Tennessee Titans selected Griffin with their #1 pick (19th overall)  of the 2007 draft.  Michael has provided solid coverage in the secondary for the tacks starting 119 games through 2014, earning 2 Pro Bowl appearances. In 2008 Michael logged a career high 7 interceptions for 172 yards and a TD.

Griffin was a last minute committal to Aaron Williams’ Lone Star Showcase. I had a few cards that I really wanted to get signed and this Adrenalyn was among the tops of that list.   It’s really easy to spot Michael in a crowd due to his dreads and he was the first player I identified. With fans, Michael has a great sense of humor and really likes yanking people’s chains by making them think he is angry with them.