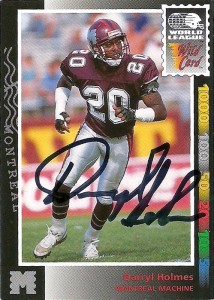 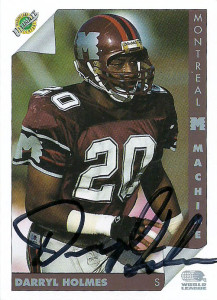 Fort Valley State is a small school pipeline for NFL talent producing over the years such names as Eddie Anderson, Greg Lloyd, Nick Harper, Rayfield Wright, and Tyrone Poole.  Darryl Holmes appeared in between Lloyd and Anderson playing for Wildcats during the mid 80s. Going undrafted, Holmes joined the New England Patriots in 1987 playing in 15 games.  As an extra safety in the formidable Patriots secondary, Holmes made his living as a special teams burner. He played 3 seasons in the NFL recording 1 interception for 4 yards and 2 fumbles.

After sitting out a season, Darryl was drafted by the Montreal Machine of the WLAF in 1991.  During the 1991 season, Holmes recorded 59 tackles and an interception. He returned to the team for the 1992 season and contributed another 2 interceptions for 28 yards.

Holmes has been involved in numerous NFL Play Football initiatives and football camps since retirement around his home town.