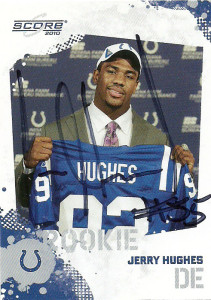 So I went to the local card shop to find a card of Jerry Hughes Jr off of his short card list, only to have been beaten there by a friend who was also going to the event. Kindly enough he offered me this Score 2010- a set that is thoroughly unappreciated, and a nice transition from the well designed Score 2009.  Hughes was approachable enough, and signed every card that was placed in front of him with a huge smile. We talked briefly about the Bills, and I told him that Rex Ryan has me the most excited about the franchise since the 90s. We then confirmed the mantra that, “You gotta believe,” with big Kool-Aid sharing smiles.

Hughes has always been battling uphill for respect, despite his natural athleticism and production. Jerry was shifted to defensive end when he arrived at TCU in 2006.  It’d be  in 2008 when Jerry settled in, with 52 TT, 19.5 TFL, 15 Sacks, and 2 interceptions- one of which he returned for a TD. He returned to TCU for his Senior season and again had a banner year with 58 TT, 16.5 TFL, and 11.5 sacks.  The Colts made Jerry the first Horned Frog to be Drafted in the first round since LT, with the 31st overall pick in 2010.

Jerry didn’t play that much for the Colts over his first three seasons. The Colts liked to use their defensive ends as tweeners, and had him set up at OLB. In 2013, he was traded to the Buffalo Bills. With that chapter closed of his career, Hughes had 5 sacks and 31 tackles in 3 seasons with the Colts.

Given the opportunity to play with the Bills was just what Jerry needed. The change of atmosphere allowed him to blossom into a solid pass rusher alongside Mario Williams. In 2013, Jerry had 10 sacks, 32 tackles, and 2 forced fumbles, playing in all 16 games.  Allowed to start all 16 games, Jerry had 36 tackles, 10 sacks, and a pick for 18 yards that he returned for a TD against the Cleveland Browns, in 2014.