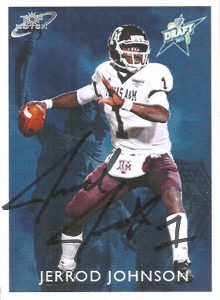 I was a big fan of the United Football League, before all the dirt came out about them not paying their players, and developed a set of cards for the league. As word got around of my work, a few players contacted me and asked for their cards, so I expanded the set from roughly 50 to 100 cards.  Included in the set were 12 or so rookies who were selected by the league during the first ever sports Twitter draft.

After Josh McCown had bolted back to the NFL as one of the UFL’s success stories, new Hartford Colonial’s coach Jerry Glanville assembled an impressive coaching staff and selected Jerrod Johnson with the first overall pick of the 2011 UFL Draft. Johnson planned to sign with the league, but with dark financial clouds brewing, Jerrod signed with the Philadelphia Eagles. Soon thereafter, the Colonials owner assumed control of the Virginia Destroyers, and the league contracted Hartford.  Jerrod saw time on various rosters around the NFL (Eagles, Steelers) and Arena (Rattlers) leagues. He then returned to the UFL in 2012 suiting up for the Sacramento Mountain Lions. Johnson threw for 321 yards, completing 25 of 59 passes with 3 touchdowns and 1 interception. He also ran for 12 yards in 6 attempts.  This led him back to the NFL, where he ws on the offseason and practice rosters of the Seahawks and Bears through the 2014 season. Later Jerrod signed with the Montreal Alouettes.

Jerrod liked the custom that I did of him, and when I said the #1 pick of the UFL in 2011, he remarked, “The man knows!” Jerrod was one of the many attendees at the Lone Star Showcase. Working with the kids at quarterback you could tell he got a lot of enjoyment out of giving back. Although it was a pretty hot day, the event was well run and players were kind and accomodating to fans of all ages.