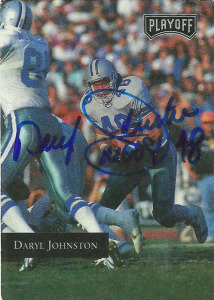 I used to go to training camp for the Cowboys way back when they were in Austin. On one of the first days that I was there I got Daryl Johnston on his Topps 1990 rookie card. A few years later I got the Topps 1992 and this 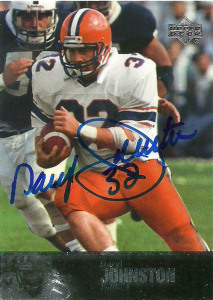 Playoff 1992 card. I took them both to training camp with me,
but never was able to get Johnston again. I don’t know whether or not he recognized me as a regular at camp, or that the Cowboys were too big for their britches and didn’t sign anymore, but he went from being a stellar in person signer to the classic ignorer, within 2 years. Part of me didn’t blame him if that was the case. The fences at traning camp were a difficult to navigate with 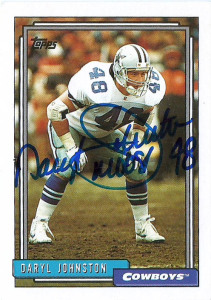 the throngs of fans who wanted autographs. Not to mention there
were a lot of kids running over to the local card shop and selling all those autographs right afterwards.  Needless to say it’s great to see that Johnston is a pretty good signer TTM. When I uncovered this Upper Deck Legends card recently I went ahead and shot out these cards to him.  Johnston is not a member of the NFL concussion litigation group. He instead is an advocate of proactive brain testing for players.