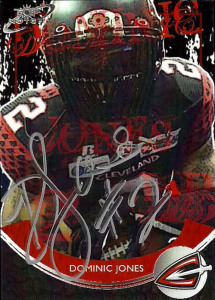 Dominic Jones played two seasons at the University of Minnesota before transferring to Otterbein University in 2010. He had 137 tackles, 2.5 tackles for loss, and two interceptions as a Golden Gopher. He made an immediate impact at Otterbein where he was First-Team All-OAC, All-Region and All-America in his only season there.
A dangerous return man and defensive back, Dominic earned Second Team All-Arena Honors as a kick returner after setting a single season franchise record with 1,795 yards in 2013 for the Predators. He also collected 91.5 tackles and two interceptions. Rejoining the Gladiators in 2014 Dominic had a career high 4 interceptions and 27 pass breakups as he helped platoon Cleveland’s secondary.

Dominic along with a few other Gladiators were nice enough to sign a few cards for me this season through a contact of mine up in Cleveland who went to one of their playoff games. Jones liked the card so much he posted it to Twitter.