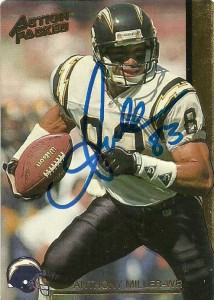 An impressive track man in college, Miller was an accomplished wide receiver for the Tennessee Vols, during a golden era of wide receivers at the college.  In 1988, he’d be drafted by the San Diego Chargers, taken with the 15th overall pick. Although his rookie season wasn’t impressive, he’d split time on kick returns with 648 yards on 25 returns and a TD. It’d be in 1989 that he’d have a breakthrough season, with a career high 1,252 yards and 10 touchdowns, along with 533 yards on 21 returns and a TD. He’d also place second in the NFL’s Fastest Man Competition behind Redskins DB Darrell Green. Although Miller for most of his career suffered from San Diego’s lack of stability at quarterback, he still managed to put together respectable numbers through and through.  He’d add two more 1,000+ yard seasons to his resume playing for the Chargers in 1992 and 1993.

With Free Agency in full effect by the 1993 season, and Anthony’s clock up with San Diego in 1994, he signed with the cross divisional rival Denver Broncos. He’d post two more 1,000 yard seasons catching passes from John Elway through 1996.  After a final season in Dallas, Miller retired.