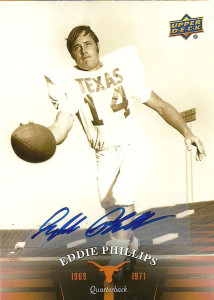 Eddie Phillips had big shoes to fill, guiding the Longhorns offense after quarterback James Street graduated in 1970. He responded marvelously, leading Texas back to a share of the National Championship. During 1971 Phillips had his best game of his career in the Cotton Bowl, single handedly keeping Texas offense in a game against Notre Dame. He rushed 23 times for 164 yards, and was 9 of 17 through the air for another 199, but the Horns ultimately lost 24-11.  Phillips returned later in the year for the Longhorns opener, however injuries limited his effectiveness the remainder of 71.  The Longhorns remained relevant and played in the Cotton Bowl and Hula Bowl in 1972.  Eddie finished his career at Texas with a 14-2 record and 1,211 yards rushing.

Phillips was selected in the 5th round of the 1972 draft by the Los Angeles Rams. Eddie was converted to safety, but did not make the roster of the team. He returned to Austin and has been involved in the financial industry for many years.