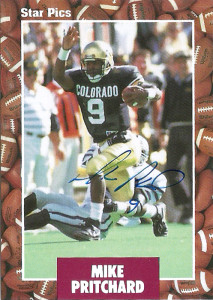 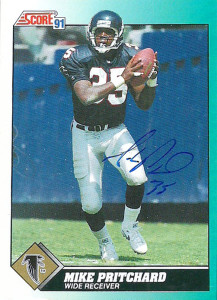 When Mike Pritchard hit the field for the Colorado Buffalos he was a virtuouso on offense, displaying excellent athetic prowess playing runningback, wingback, tailback, and wide receiver on offense.  He’d also handle some kick return duties as well along the way. He’d finish his career for the Buffs, with 47 receptions for 1241 yards, and 10 touchdowns, along with 30 kick returns for 693 yards. Despite playing only one full season at wide receiver, Pritchard finished 3rd in school history in career receptions and 2nd in touchdowns. An All-Big 8 1st team selection and team MVP in 1990, Mike had 28 catches for 733 yards and 6 touchdowns. He also stood in for Eric Bieniemy one game and surprised the Volunteers rushing for 217 yards. 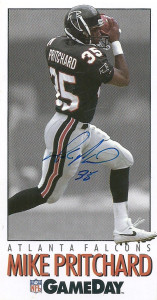 Expected to make a big free agent splash, Pritchard joined the Broncos in 1994, but injuries limited him to just 3 games. He’d return in 1995, starting 13 games and posting 33 receptions for 441 yards and 2 TDs, ending his tour with Denver. 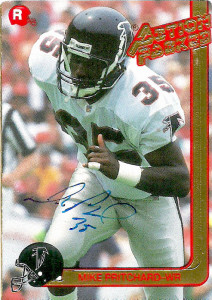 As of 2014, Pritchard lives in Nevada. He does play by play for ESPN and does color commentating for Nevada-Las Vegas Football games.