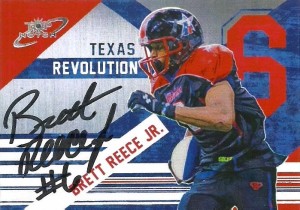 Brett Reece Jr. is a great example of why leagues like the AFL and CIF need to exist.  Playing for a school like Ouachita Baptist out of Arkadelphia, Arkansas shouldn’t prevent you from realizing your dreams as a football player, and Reece has continued to play at every opportunity that has been afforded to him.

During his sophomore season, Brett recorded a team high 825 receiving yards and 6 TDs on 46 receptions. In 2011, he led the Tigers in receiving with 30 receptions for 489 yards and 3 TDs en route to an All-GAC Second Team Selection. 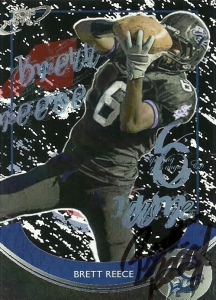 Brett has continued to play in different Arena style leagues since then. He made 5 receptions for 43 yards for the San Antonio Talons, before being reassigned back to the Texas Revolution. In 2015, he was off to a fast start before suffering a season ending foot injury. Still he finished as the Revs leading receiver in 2015 with 34 receptions for 424 yards and 9 TDs in just 6 games- earning CIF Offensive Player of the Week Honors in Week 6.

I had created Reece’s card shortly before he was reassigned by the Talons. Since I didn’t have a good photo of Reece, I worked over an old photo of his from Ouachita. Pretty darn good if I say so, and Reece loved it. Brett contacted me again in 2015 and told me that he liked the Talons card so much, he wanted me to do one of him in his Revs uniform. I literally cranked this Revs design out in a day or two, and it too looks amazing.