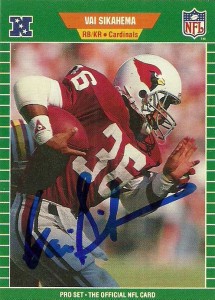 Vai Sikahema does not sign through the mail. Although his jobs in public service arenas and the media would lead one to believe so, he boasts a 0% success rate through many websites. Many of his cards, especially when the big football card explosion of the late 80’s appeared, were very slick action shots. I had him on a shortlist for quite sometime, but due to his inaccessibility, I went ahead and did a paid signing for Sikahema. 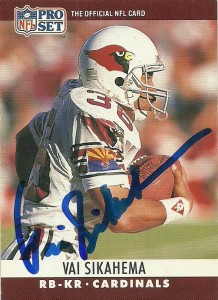 Vai Sikahema was part of the early 80s pipeline of Tonga football players. In fact he was the first Tongan drafted to the NFL, taken in the 10th round by the St. Louis Cardinals in 1986.   He played his college ball at BYU. There he was an electrifying kick returner, setting the college punt return record with 153 career returns.

Sikahema played at a time when the league afforded the additional luxury of roster spots for dedicated return men, thus he rarely saw the field beyond kick and punt returning.  In his first two years in the NFL, he was named to the Pro Bowl, and in 1987 was named All-Pro. He led the league in yards both seasons cracking the 500 yard barrier in both seasons, and in TDs in 1986 (2), and returns in 1987 (44). Over his 8 seasons in the NFL, Sikahema never failed to return less than 26 punts a season. 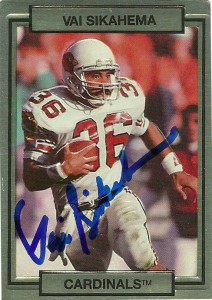 After 5 seasons playing for the Cardinals, Sikahema signed with Green Bay via Plan B.  He played one season for the franchise before he joined the Philadelphia Eagles, enjoying a brief renaissance to his career. During the 1992 season,  Vai became a part of history when he blew past the New York Giants punt coverage crew. He’d score a TD and then infamously box the Giants’ padded goal post, and make highlight films everywhere for years to come.  Sikahema retired after the 1993 season deciding to shift gears in his life towards sports journalism.

At the time of his retirement, Vai was less than 150 yards from the NFL career punt return yardage record held by White Shoes Johnson, and held the career record for most punt returns in a career.  He is also immortalized in Tecmo Super Bowl where he makes a great jack of all trades back.