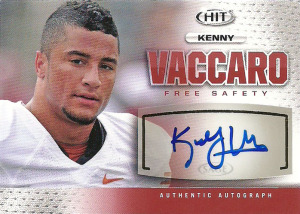 Longhorn Kenny Vaccaro punctuated his college career at Texas by being made a first round choice of the New Orleans Saints in 2013. He logged 231 total tackles (158 solo/73 assists), 14 tackles for loss, 2 sacks, 4 forced fumbles, 5 interceptions, and 24 pass defensed. With a good overall set of athleticism, loose hips, and strength, Vaccaro was seen as a starting caliber safety in the NFL.

The Saints porous defense was going through transition with new defensive coordinator Rob Ryan trying to retool the defensive backfield. Kenny fit right in playing nickle, strong, and free safety.  He’d start 14 games for the team nabbing 62 tackles, 1 sack, 7 pass defensed, 1 interception for 29 yards, and 1 forced fumble.  He was considered a rising star in the young defense. In 2014, the Saints played him at both free and strong safety, but with the team having a difficult season, Vaccaro was benched after 13 games. While the team values his aggressive play, the double-edged sword was his caliber of recklessness. Vaccaro finished his season with 51 tackles, 5 pass defensed, and 2 picks for 45 yards.

I don’t grab the Target Autograph Memorabilia as much as I had in the past because of the lack of names that I had been pulling from them, but wow, I got a nice hit out of the Target grab bag with this one.  Another member of Texas DBU down.