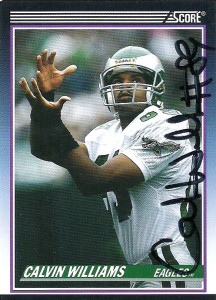 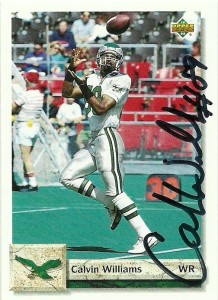 The Eagles passing attack during the late 80s was crippled by the declining durability of wide receiver Mike Quick, and the departure of Cris Carter, so they moved to address it. To do so, Philadelphia aggressively went after receivers during the 1990 draft. In addition to selecting Mike Bellamy in round two, and Fred Barnett in round three, the Eagles swooped back in round five and picked Calvin Williams. Williams had one of the better combines that year, and fought had to win a spot in training camp. He performed so well, that he took over Carter’s former starting spot, and set an Eagles rookie record with 9 receiving touchdowns.  His 37 receptions for 602 yards contributed to him earning All-Rookie Honors at the end of the season. A solid redzone threat throughout much of the early part of his career, Calvin again led the Eagles in TDs in both 1992 (7 TDs) and 1993 (10 TDs- a career high).  In 1995, he had a career high 63 receptions and later joined the Baltimore Ravens during the 1996 season.

I spoke to Calvin back in 2011 via SotL (School of the Legends). Back then, SotL billed itself as an online community for fans to talk to, and get advice from NFL players. I had begun to build a reputation on the site as a knowledgeable fan, and began to send out TTM to some of those players. Over those months I had a few conversations with Calvin and decided to shoot a few cards out.

Shortly after declaring a new long wait response, Calvin Williams blows that one out of the water by nearly 3 years. Williams has built an interesting reputation within the TTM community. Not only is Calvin a sporadic signer, he signs only one card, keeps the rest, and frequently switches out the card he sends back with other people who have previously sent requests.  The Score Supplemental was the only card that I sent out back in 2011 that made it back. I was happy with that. In the meantime before that one came back I had sent out a second attempt, but he switched out the Action Packed Rookies 1990 and the GameDay 1992 cards with this – Upper Deck 1992 card. Oh well, still a success in my book.

Calvin was among the leading plaintiffs who sued the NFL and helmet makers for concussion and head related injuries in 2011.  He’s been involved in physical education for quite a few years, and is currently on the Purdue Boilermakers staff.