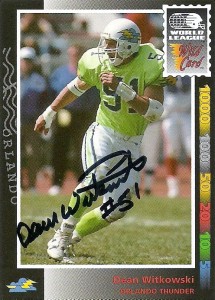 Dean Witkowski was an outstanding player at North Dakota. He arrived at the college in 1987, and was the school’s all-time leading tackler at the time of his departure in 1990, with 548.  He is also notable for holding the single season school record for tackles in a season with 185 in his final season.  Witkowski was selected in the 9th round of the 1991 draft by the Green Bay Packers, and joined a selected handful of North Dakota players who have been drafted into the NFL.

In 1992 Dean was selected by the Orlando Thunder of the World League of American Football in the 11th round. Coach Galen Hall was rebuilding after the Thunder defense collapsed late in the 1991 season.  Among his moves was bringing in Witkowski.  The defense indeed saw an improvement over the 1992 season, culminating in an appearance in World Bowl II against the Sacramento Surge.

He was inducted into the North Dakota Fighting Sioux Hall of Fame in 2004. Dean sent me a nice note along with the autograph.