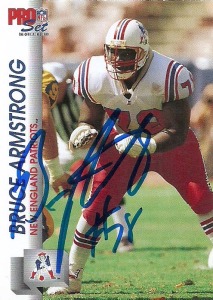 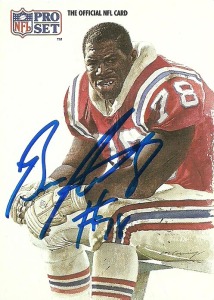 The venerable Bruce Armstrong really nailed down the right/ left tackle positions for New England throughout the late 80s and into the 1990s, so much so that he was nominated for the NFL HoF in 2011, and the Patriot organization retired his number. Armstrong over his storied career played in a franchise high 212 games. Amazingly enough he started as a tight end at Louisville, before switching over to tackle as a Senior- where he allowed zero sacks. Armstrong had it all over his career with the Patriots, combining speed, power, and durability, making him a formidable pass and run blocker.

Merv Corning’s work on the Pro Set Superbowl cards were  not enough, so the company had him come back to create the All Pro subset in 1991. He also chipped in some spot work on ProLine as well. While I was never a fan of ProSet 1992’s break in style between the two series that year, they still had some pretty good photos littering the set and this card with the red pants is a really nice throwback issue the Patriots briefly did.  A solid signer, the venerable Armstrong boasts a 90% response rate (250+ attempts) through 2015.