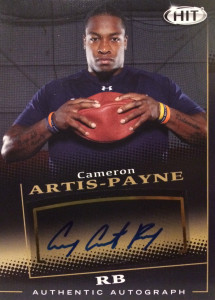 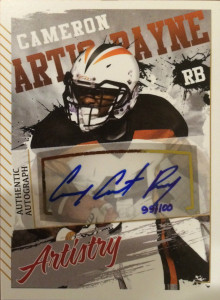 After grinding it out in JC for two years, Cameron Artis-Payne transferred to Auburn- a school steeped in tradition of quality ground games.  He rushed for 610 yards on 91 carries and a strong 6.7 yards per carry in 2013. Artis-Payne proved it was no fluke in 2014 when he led the SEC with 1,608 yards on 303 carries and 13 TDs.

He was selected in the 5th round of the 2015 NFL draft by the Carolina Panthers. Artis-Payne battled fellow rookie Brandon Wegher in the runningback rotation behind Johnathan Stewart and Fozzy Whittaker.  Cameron saw action in 116 snaps, carrying the ball 45 times for 183 yards- primarily in relief of Stewart. His first TD came against the Tampa Bay in a 38-10 thrashing of the Bucs.