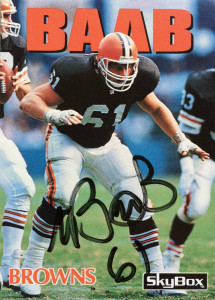 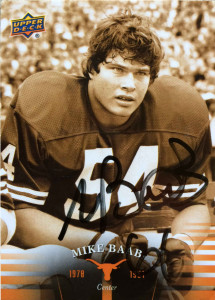 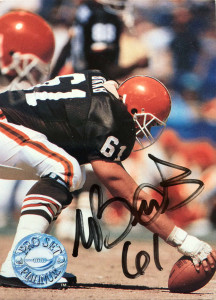 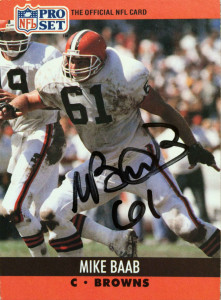 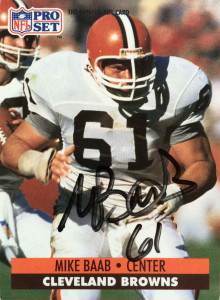 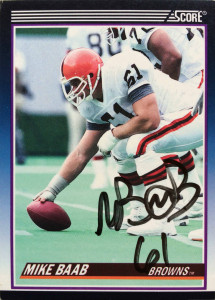 Mike Baab was a fixture at center for the Cleveland Browns after being selected in the 5th round of the 1982 draft.   He is remembered perhaps most strangely for a film that he put together with his Browns teammates called “Masters of the Gridiron”, which was not only inspired by the Chicago Bears Super Bowl Shuffle, but also He-Man and the Masters of the Universe, and the section of the crowd at the stadium that called themselves Baab’s Barbarians.

Mike played with the franchise through the 1987 season where he became a leader in and out of the locker room.  He then was unceremoniously traded to the New England Patriots one week before the regular season was to began in 1988.  (Apparently head coach Marty Schottenheimer wanted to start Gregg Rakoczy at center and Mike did not want to be a backup.) The move so angered Baab that he stormed out of the team facilities and players began to openly dissent- most namely starting quarterback Bernie Kosar who criticized the move.

While Baab toiled away in New England in 1989 and 1990 (which back then amounted to a Siberian prison camp) starting 28 of 32 games, the Browns offensive line suffered and the quarterbacks took a vicious pounding. Suprisingly he was left unprotected by the Patriots following the 1990 season, so Baab put his feelers out about returning back to the place he called home for most of his football career: Cleveland.

Mike returned to Cleveland and anchored the Browns line through the 1991 season.  He’d be lured to Kansas City for one final season before finally putting up his cleats and moving back to Central Texas.

Mike was inducted into the Longhorn Athletics Football Hall of Honor in 2008.  A letterman at Texas from 1978 to 1981, Baab was voted team captain for the Longhorns as a senior. That year, he helped Texas post a 10-1-1 record, including a 14-12 upset of then-No. 3 Alabama in the Cotton Bowl, en route to second-team All-America honors.

There were so many good past and present cards of Mike, I did abuse this one slightly.  Baab was kind enough to sign these cards for me, albeit after a long wait.

Some real solid cards of here of Mike. I think my favorite of this group is the Skybox entry. The framing element that they use with the last name, really gave these cards a nice poster effect.  At the time I was surprised that these cards didn’t get more traction in the market because they were very cutting edge. I have a soft spot for the ProSet 1991 card. It’s got a nice rough close up of Baab backing up and demonstrating some sleight of hand technique while his pad rolls up his hand.  These cards pretty much encapsulated the height of my collecting days and the rebirth of it with the Upper Deck UT 2010 entry.