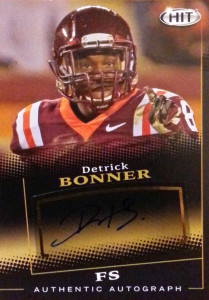 Detrick Bonner was a three year starter at Virginia Tech,who fell off the radar of scouts during the NFL Draft in 2015, due to an injury that limited his participation in the combine.  A reliable and consistent starter for the Hokies, Bonner demonstrated versatility lining up at not only safety, and corner, but also as a whip linebacker. In August of 2015, he signed with the Canadian Football League’s Toronto Argonauts.