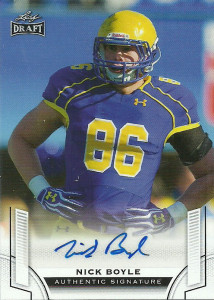 Nick Boyle was pushed into action as a Freshman and took control of the tight end position for the Delaware Hens. A well decorated player, Boyle was named All-CAA in both his Junior (2013) and Senior (2014) seasons. With his size and frame (6’3″,  268) he could develop into a pretty solid every down tight end at the NFL level. He already has proven hands, but needs to work on squaring up his blocking for the NFL level.

After the departure of Owen Daniels and Dennis Pitta’s back to back season ending injuries, Baltimore looked to reboot at the position. The team selected Maxx Williams early on and then came back to select the sure-handed Boyle in the bottom of Round 5 in the 2015 NFL Draft.  In his rookie season he caught 18 passes for 153 yards. He will face an uphill climb matching those numbers in 2016, as he was suspended for the first 10 games of the season for performance enhancing drugs.