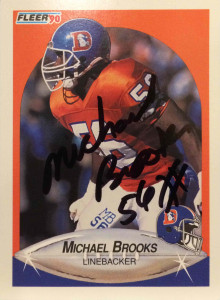 One is better than none- I always say as Michael Brooks returned only this Fleer 1990 card from among the four cards I sent. You never know why he decided to only send one back, but I will assume that it is because he didn’t have the other cards in his personal collection.

Michael Brooks was a 3rd round pick of the Denver Broncos from the 1987 draft.  His draft stock plummeted after Michael had a major knee injury during his final year at LSU. It took Brooks some time to recover, and the Broncos brought him along slowly his rookie year.  Michael eventually made a really nice compliment to Karl Mecklenburg in the linebacking corps. From 1989 to 1992 Michael logged at least 120 tackles in each season, including 2 seasons with over 170 (1990- 175, 1992- 170).  He earned his only Pro Bowl appearance for his 1992 season.

Brooks career continued with the New York Giants in 1993, where he put together 3 more solid 90+ tackle seasons. He’d play 4 games in the 1996 for the Lions, retiring after the season. Brooks is immortalized in Tecmo Super Bowl, and was inducted into the Louisiana Sports Hall of Fame in 2009.