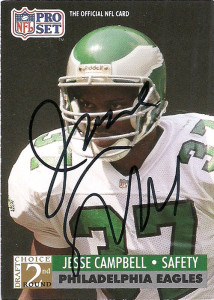 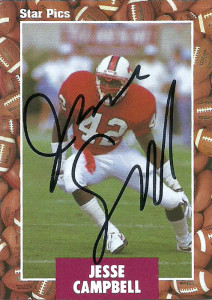 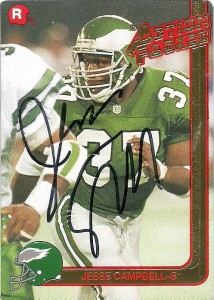 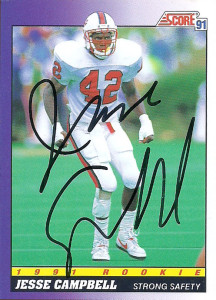 A second round pick by the Philadelphia Eagles out of NC State, Jesse Campbell was a 3 year starter and 1st Team All ACC Member for the Wolfpack, notching 7 interceptions, 187 tackles, and 5 sacks over his career.  A fearsome hitter, Campbell also forced an impressive 15 fumbles punishing receivers and runners alike with a linebacker’s abandon.   He’d sustain a knee cartilage injury before making it to the regular season and spend his first season on IR.

In 1992 the Eagles were going in a new direction under head coach Rich Kotite and defensive coordinator Bud Carson. While Campbell was given ample time to impress in camp, it became a numbers game, and Carson’s defense requires safeties that can cover and places a premium on cornerbacks. Jesse was cut when the Eagles opted to resign corner Eric Allen.  He’d sign with the rival New York Giants and push his way into a starting job by 1994.  Campbell played with the Giants through 1996, before finishing out his career with the Redskins over the next two years, retiring in 1999.

He’s dabbled in coaching and is currently involved in school administration.