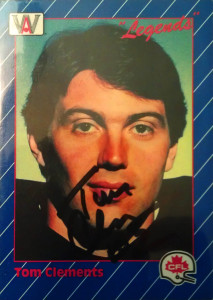 Tom Clements has garnered quite the reputation over the last few years working as a quarterback whisperer for the Green Bay Packers tutoring the likes of Aaron Rodgers and Brett Favre, while also getting the best out of other names such as Kelly Holcomb, Kordell Stewart, Tommy Maddox, Elvis Grbac, and  Jake Delhomme at his other stops.

Being a former HoF QB in the CFL, has given Clements an edge over his coaching competitors. Some say it is his calm and easy going demeanor during gameday, or the a way of always getting a little bit more out of his quarterbacks. Regardless, Clements is praised in circles around the NFL as an up and coming coach.

Tom Clements was inducted into  the Canadian Football League’s Hall of Fame in 1994, after a prolific career playing for the Ottawa Rough Riders (1975-78) where he was named the CFL’s Rookie of the Year in 1975. In 1976, Tom earned his first Grey Cup Championship earning the Outstanding Offensive Player award. He joined Saskatchewan and later Hamilton in 1979, before a brief foray into the NFL in 1980 with the Chiefs. Returning to the Tiger Cats in 1981, he’d play there through the 1982 season and then join the Winnipeg Blue Bombers. He’d earn his second Grey Cup Championship and Outstanding Offensive Player of the game award in 1984, and league MVP honors in 1987 retiring after the conclusion of the season.

He’s also had a stop at his Alma Mater Notre Dame, before making the leap to the NFL as a position coach and offensive coordinator for the Saints (1997-1999), Chiefs (2000), Steelers (2001-2003), and Bills (2004-2005), before joining the Packers in 2006. The Packers are well aware of Clements reputation as he has steadily risen in the organization’s coaching hierarchy. Although embattled after the 2015 campaign, Clements serves as the Packers Offensive Coordinator and Associate Head Coach going into the 2016 season.