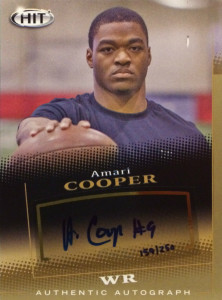 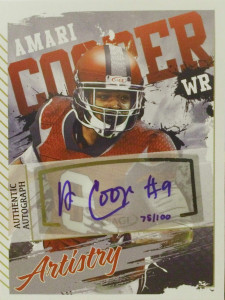 Playing for the Crimson Tide during his college career, Amari Cooper posted impressive numbers, including leading the nation in receptions with 124 catches in 14 games (2014).  After the year, he’d earn the Fred Biletnikoff award given nationally to the best college receiver in the nation and be a unanimous All-American.

Amari was taken with the 4th pick of the 2015 NFL draft by the Oakland Raiders. The Raiders were rebuilding on the offensive side of the ball and were trying to surround young quarterback Derek Carr with offensive weaponry.  Cooper connected immediately with Carr and finished his rookie season with 72 receptions for 1070 yards and 6 touchdowns. He’d also chip in returning 8 punts for 41 yards. Arguably Cooper’s best game came in a 37-29 win over the Chargers in which he had 5 receptions for 133 yards and a TD.  After the season Amari was selected as a Pro Bowl Alternate.