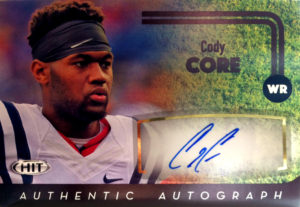 A late 6th round choice of the Cincinnati Bengals, Cody Core played collegiality at the University of Mississippi.  Originally a defensive back, Core didn’t make the transition to wide receiver until 2014.  Paired alongside Laquon Treadwell, Core had 37 receptions for 644yards and 4 TDs in 2015.  He is a skilled special teamer and will be expected to make his living there while he grows into his role as a receiver. He will get plenty of opportunity after the Bengals lost Mohammed Sanu and Marvin Jones during free agency.