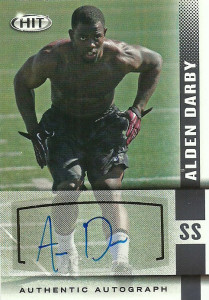 Alden finished his career at Arizona State with 217 tackles, 2 sacks, 3 forced fumbles, and 10 interceptions at Strong Safety. He had 2 interceptions he returned for TDs, oddly both against the USC Trojans. He ran a decent 4.5 40,  displays the physical prowess to play all positions in the secondary, and is a smart gunner on special teams, but went undrafted in 2014. A practice squad mainstay so far in his brief NFL career, Darby has yet to see game time action outside of the preseason. Picked up by the San Diego Chargers in 2014, he signed with the Steelers in 2015, but was cut in early September of that year. The New Orleans Saints quickly scooped Darby up and added him to their practice squad.  He was signed to a futures contract by the squad in 2016.