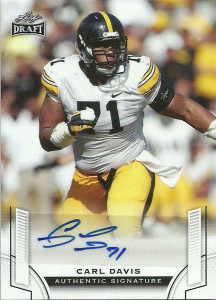 At 6’5″, 320 Carl Davis has the tools to really exceed to the next level.  While at Iowa he was a 2 time second Big Ten selection at defensive tackle. Despite this Carl’s lack of stats hindered his draft status. Some pundits thought he’d sneak into the bottom of round one, but he ended up plummeting to round 3 where he was selected by the Ravens, who have a penchant for finding good defensive players in the rough.  The Ravens it looks like have opted to punch Davis outside to defensive end in their 3-4 alignment. He finished the 2015 season 11 total tackles.