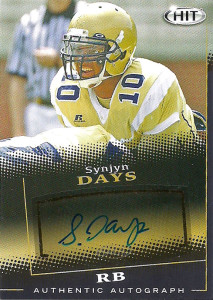 Synjyn played collegiality at Georgia Tech from 2011 to 2014.  His best year came in 2014 when he amassed 924 yards on 157 carries and 9 rushing touchdowns.  He went undrafted in the 2015, and signed a free agent contract with the Dallas Cowboys, but faced an uphill battle competing with the likes of Joseph Randle, Lance Dunbar, and Darren McFadden for playing time.  Soon thereafter the Cowboys also added Lache Seastrunk to the loggerjam, and cut Days. Synjyn is keeping the dream alive and is continuing to train for the opportunity to continue his pro dream.