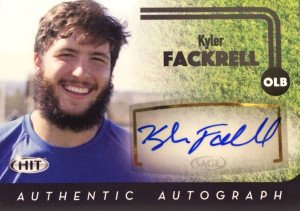 Kyler Fackrell is an interesting prospect out of Utah State. Reminding me a lot of Connor Barwin, Fackrell would be a more highly regarded prospect, if not for an ACL injury sustained at the beginning of his 2014 campaign.  A first team all-Mountain West player in 2015, Fackrell had a school-record 12 quarterback hurries, and 4.0 sacks. He’d be named a semifinalist for the Butkus Award and earned an invitation to the Senior Bowl. Perhaps his most electric highlight came in 2013 when he made a spectacular 99 yard interception return for a TD.

Kyler has many of the qualities that scouts look for in a 3-4 outside linebacker.  He’s not scared to pin his ears back and blitz or stuff, cover or play special teams either. While at Utah State, he was a jack of all trades for the Aggies who is considered obsessive about the sport.  It is viewed that he can mature into an every down linebacker given some maturation into the pro game and was viewed as a solid 3rd round pick.

Kyler was selected late in round 3 of the 2016 draft by the Green Bay Packers.