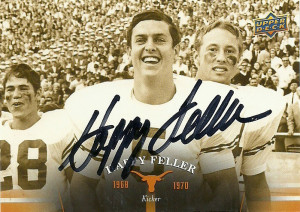 With a name like Happy Feller, you might as well be predispositioned to be positive about things.  He joined the Longhorns Hall of Honor in 2014, after being a part of two national championship teams for the University of Texas. While there he set Southwest Conference records for both touchbacks and point after attempts. His 55 yard field goal against UCLA  in his senior year was a school record at the time as well. 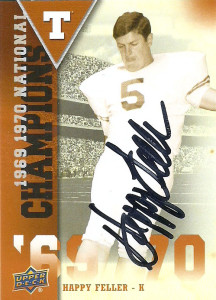 Feller went on to play in the NFL for 3 seasons.  A 4th round pick of the Philadelphia Eagles, he’d beat out Mark Moseley in training camp to secure the kicking job.

The Eagles were perennial losers at the time. Head coach Jerry Williams was fired and replaced by interim coach Ed Khayat. Khayat brought New Orleans placekicker Tom Dempsey in and put him on the taxi squad. With an accomplished kicker like Dempsey breathing down his neck, Feller began to question his ability. His game ultimately suffered.  Happy played in 1972 and 1973 for the New Orleans Saints, but a quadriceps injury slowed him down.

After football,  Happy founded TeleDynamics, which specializes in wholesale electronics. He signed these 2 cards for me in a very short 4 days. On the letter he wrote next to my salutation, “My pleasure!” It’s always great when you can tell that a player really is just as happy and excited to sign for you as you are.