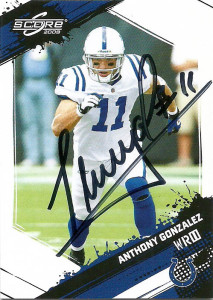 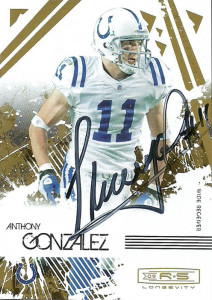 Anthony was a 1st round pick of the Indianapolis Colts in the 2007 draft.  With a run on receivers early on, Anthony would be the 6th receiver taken off the board with the 32nd selection.  Gonzalez was thrown right into the starting lineup while injuries were taking their toll on future Hall of Famer Marvin Harrison.  Anthony saw 51 targets in 9 starts, catching 37 passes for 576 yards and 3 touchdowns in a solid debut.  In 2008 Gonzalez saw action in all 16 games, starting 2 and notching career highs in virtually every category with 57 receptions for 664 yards, 4 TDs, and a 58 yard long.  As the Colts were counting on Anthony for the 2009 season, he went down in the season opener against Jacksonville.  The worst part about it was a non contact play. He’d be lost for the entirety of the season with a  PCL injury in the right knee.

In 2010, Anthony suffered a high right ankle sprain in regular season opener vs. Houston and missed the next 5 games. He returned to action in Week 8 vs. the Texans, snagging four catches for 55 yards before suffering a torn PCL in his left knee on a hit by Texans safety Bernard Pollard, ending Anthony’s season.

As the Colts crumbled into chaos with a possible career ending injury to starting quarterback Peyton Manning in 2011, the team struggled mightily in his absence.  Anthony suffered from a myriad of injuries, suited up for 8 games, but made no catches. He’d sign as a free agent after the season with the New England Patriots, but didn’t make the team.

Gonzalez soon thereafter enrolled in the Stanford Graduate School of Business and officially moved on from the NFL.