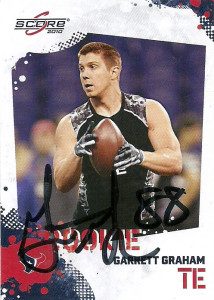 Garrett Graham is another member of the Wisconsin connection to the Houston Texans. Oddly 3 members of the Texans at one point played TE at Wisconsin for the Badgers- Graham, Owen Daniels, and DE JJ Watt within the last 10 seasons.

With Owen Daniels injuries creeping up on him, the Texans decided to draft Graham in the 4th round of the 2010 draft. As a Senior, Garrett had a career high 51 receptions for 624 yards and 7 TDs for the Badgers- leading the team in touchdown catches, and ranking second in both receiving yards and catches.

The Texans love their tight ends, and with Daniels and Joel Dreesen in the fold, Garrett had his work cut out for him to climb into the lineup. He didn’t see significant playing time until 2012, when he became the 2nd string TE behind Daniels, after Dreesen signed with the Broncos. Daniels during the regular season went down with an injury so Garrett got his chance to start. He finished 2012 with 28 receptions for 263 yards and 3 TDs.  Daniels signed with the Ravens in 2013 clearing the way for Graham as starter. Garrett responded with a solid outing in 2013,  posting career highs with 49 receptions for 545 yards and 5 touchdowns.

The Texans in the meantime fired longtime head coach Gary Kubiak, who ran a very heavy tight end oriented offense.  Multiple offense coach Bill O’Brien was brought in to run the show. Graham’s numbers slid to 18 receptions for 197 yards and a TD in 2014.  He made 4 catches in 8 games in 2015, but was passed on the depth chart by Ryan Griffin upon his return from injury.

Graham was the last player on the table at the Whataburger Community Player of the Year event. While his attitude appeared laconic, he quickly warmed up when I came to the table. I told him that he had some really, really ugly cards, and the ones of him in his scouting combine duds were among the worst. He and I caught a good laugh about it before I wrapped up my haul.