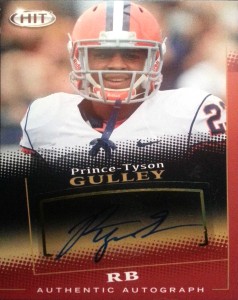 A quick and decisive runningback, Prince-Tyson Gulley has over 2,000 career rushing yards for the Syracuse Orangemen. He also was a respectable option out of the backfield and even spent some time working special teams his Freshman year. Prince rushed for a 607 yards and one touchdown on 127 carries, and caught 21 passes for 107 yards in 2014. In 2012, he ran for a career-high 830 yards and earned MVP honors in Syracuse’s Pinstripe Bowl win over West Virginia.  At 5’8″, 193 most teams view Gulley as a 3rd down or change of pace back.  He went undrafted, but received an invite from the New York Giants and Buffalo Bills to attend their respective minicamps in 2015. Currently he is a free agent.