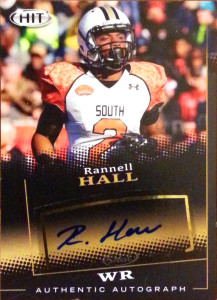 A former track man, Rannell Hall distinguished himself at wide receiver with really nice straight line speed and toughness over the middle. He didn’t really separate himself from the competition at receiver until the Senior Bowl, when Rannell was able to showcase his talents. While Hall doesn’t stand out in particular size or hands wise, he made up for it in intangibles such as potential and willingness.

As one of Blake Bortles targets, Hall had respectable outings for the Knights.  His best season came in 2013 with 57 receptions for 886 yards and 5 touchdowns.  Hall is also willing special teams contributor, averaging 25 yards in 82 returns.

Ranell stayed close to home signing with the Tampa Bay Buccaneers after the draft. He later was signed to a futures contract with the Cleveland Browns and as of the date of this post had suited up for 1 game.