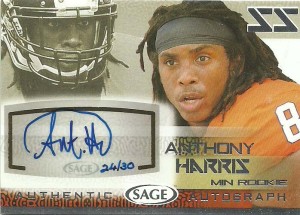 Anthony Harris piled up some serious numbers while playing free safety for the University of Virginia. In 2013 he had 80 total tackles, 6 passes defensed, and led the nation with 8 interceptions.  Harris started 35 games  for the Cavaliers, recorded 145 tackles, 2 sacks, 19 passes defensed, 11 interceptions, and 2 forced fumbles. Suprisingly, he went undrafted in the 2015 NFL draft Later he signed a free agent contract with the Minnesota Vikings.

The second card given to me as part of winning a Sage Twitter Promotion, this Authentic Autograph card is actually a pretty nice piece.  It was an afterthought in getting an authentic Todd Gurley, but he’s starting to make noise in Minnesota. He made the Practice Squad and in December was elevated to the 53 man roster.  Harris started the final 2 games of the season, and recorded 14 combined tackles, and 2 passes defensed on the season.